Verdical Group’s Drew Shula and Holly Hill were both awarded with a California Legislature Assembly Certificate of Recognition at the 12th Annual USGBC-LA Green Gala in Los Angeles, on November 10th, 2016. The awards were given by Mike Gatto, Assemblyman of the 43rd Assembly District, for Drew and Holly’s significant contributions as members of the Greenbuild 2016 LA Conference Host Committee.

Drew served as Co-Chair of the Greening Committee which focused on greening local hotels and businesses in close proximity to the LA Convention Center, where Greenbuild was held. Holly served as the Co-Chair of the Advocacy Committee which focused on VIP attendee outreach and fundraising to support the Greenbuild Legacy project and local tours hosted during the conference. 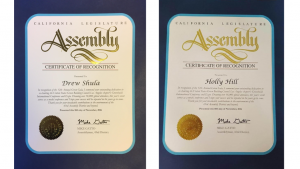