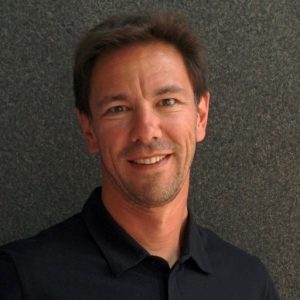 Sometimes all it takes is a newcomer with an open mind to recognize a game-changing opportunity. For the green building community in Los Angeles, that newcomer is Xavier Gaucher.

Born, raised and educated in France, Xavier Gaucher holds two master’s degrees – one in Air Conditioning & Refrigeration, and the other in Sales & Marketing. Xavier has over ten years of experience in the HVAC industry in France, Switzerland and the United States. In 1999, Xavier co-founded Reservit, an Internet hotel reservation system, which became one of the leading solutions in Europe for independent hotels. In July of 2014, he sold his shares of the business, and then moved to the U.S. a year later. Xavier’s background as a successful entrepreneur and an expert in HVAC mechanical engineering intersect perfectly in his newest endeavor in Los Angeles. 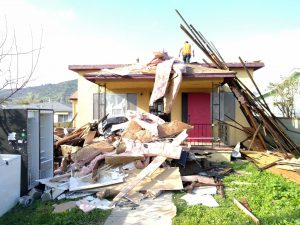 The original 1906 home in Los Angeles, CA being retrofitted into the Perlita Passive House.

Xavier is no stranger to the residential world. The wood frame home he helped to design and construct in France was highly efficient – it incorporated many sustainable design features such as a heat pump, above-code high insulation, and fossil-free energy. His current project, known as The Perlita Passive House, in Atwater Village, Los Angeles, is a one-of-a-kind retrofit project. The original 1,000 sf single family, single-story structure was built in 1906. When finished, the remodeled Perlita House will be two stories with the same building footprint, and will meet ultra-energy efficient targets. Three months into construction, the project is installing European double-pane windows (triple-pane isn’t cost effective for California Climate Zone 9), a continuous filtered ventilation system (designed by Xavier himself), high insulation, an airtight building envelope, window shading, and a specially built 1-ton heat pump unit. This project actually initiated the production of a new 1-ton Air Handling Unit (AHU) with high available static pressure—it is now available as a standard Mitsubishi AHU.

Efficiency alone does not make the project unique to Los Angeles. What is Xavier trying to achieve by incorporating these very particular energy efficient design strategies? How is the Perlita House going to pave the way for new low energy consumption homes in Southern California? 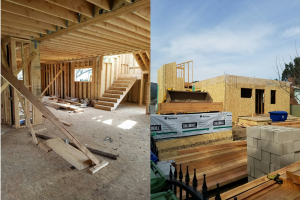 From left to right: interior of the ground floor and new wood recently shipped to the site.

What is Passive House?

The Passive House Standard initially inspired Xavier to build the Perlita House. This rapidly growing green building certification platform guides Xavier’s design and construction decisions, and after the home is built, will provide others in L.A. with the necessary tools and guidelines to replicate the standard.

Germany (with the help of Lund University in Sweden) was first to coin the design for an ultra-energy-efficient home in the early 90’s—the “Passivhaus.” The founding principle of building a home or building in a way that dramatically reduces the need for artificial heating and cooling is even more crucial now, as we better understand the causes and implications of climate change. But how does a builder accomplish this?

Designing with the building’s exact location in mind is something many architects and designers have moved away from, at least in the U.S., until fairly recently. Since the Passive House Institute was founded in 1996, homes built with the intention to pass the voluntary “Passive House Standard” are designed with passive solar techniques, superinsulation, and various other strategies that enable occupants in a home or building to remain comfortable through physical building envelope design alone.

Since its inception, over 30,000 buildings of all types (single family homes, office buildings, grocery stores, schools) worldwide have been certified to the Passive House Standard. The concept and strategies developed with the invention of passive homes now also form the backbone for many modern net zero energy buildings (NZEB) – this is the real “aha moment” that ties everything together for the Perlita House and the future of Passive House in not only Los Angeles, but California in its entirety. 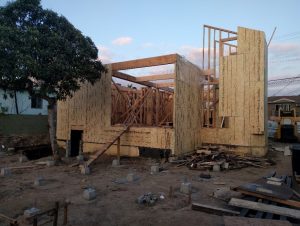 A backyard perspective of the new wood framing that has already been installed.

How is this a game-changer?

Xavier’s mission to build a realistic, affordable, and replicable energy efficient home is not just to prove its feasibility to local Angelenos, architects, and developers, but he is building the Perlita Passive House because it is the most cost effective way to achieve net zero energy and beyond. When complete, the Perlita House will produce more energy than it uses annually. How will it accomplish this – a massive solar array, no doubt? Wrong. Through only 10 solar panels installed on the south facing roof, the Perlita House is designed to achieve 110% of its energy needs on site. If the home were designed to solely meet California’s Title-24 energy code, the energy consumption would be 60% higher, making the roof too small to allow the house to be a net positive energy building through solar panels alone.

This is why the Passive House Standard could be the best answer to California’s future net zero energy code changes—it provides the most cost effective path for homeowners, builders, and developers to successfully hit these stringent targets. Strategies such as continuous superinsulation, an airtight envelope, and high efficiency windows, enable the Perlita House to significantly downsize its HVAC system, which in turn enables it to rely on fewer solar panels to meet (and exceed!) its energy needs.

Imagine building a single-family home in the year 2020, when The California Energy Commission’s 2020 Zero Net Energy goal has been fully adopted into Title-24 code. Which would you rather choose – a traditionally designed home that requires a loan or the purchase of a large solar array spanning the entire roof in order to meet code, or a Passive House Certified home built to be more comfortable, less expensive in the long run, and will only require the purchase or loan of ten solar panels easily hidden on the south facing roof? The answer is pretty clear. Once the Passive House Standard’s full potential is realized, it seems as though every human-made habitable structure in the world should be built as such.

Be on the lookout for future blogs about the Perlita Passive House Journey:

Check out Xavier’s personal blog here for more updates on the Perlita House.