An Approximation of Reality

According to the U.S. Office of Energy Efficiency & Renewable Energy, building energy modeling (BEM) is a multi-use tool that uses physics-based calculations of building energy consumption to analyze and improve building energy efficiency. Energy modeling can be used for design of new buildings, retrofitting of inefficient old buildings, and performance-path compliance with energy efficiency codes and standards such as ASHRAE 90.1. The list of uses for energy modeling grows every year, as software technology and usability steadily improves and allows for larger adoption. Currently, engineers and architects alike use it mainly for conducting energy analyses of 3D building models.

A building information model (BIM) is a 3D computer-generated model that visualizes a building’s design in software. Once in the modeling software, a user may design, optimize elements, and reconstruct the building to make it more efficient. But, how does an architect know whether or not his or her 3D model is energy-efficient?

An engineer (or anyone who’s picked up the art of energy analysis) will typically take a 3D model and insert it into, or integrate it with an energy modeling program. Once the graphical model is in there (note: a graphical model is not technically necessary to run an energy analysis, it just helps), the engineer can run simulations such as advanced HVAC modeling, daylighting analysis, climate analysis, solar simulations, and renewable energy simulations. After these are run in the energy modeling software, an engineer can see what areas within the model need improvement and can either recommend changes to the model’s designer, or can do it themselves. The goal being to make the building as energy-efficient as possible.

A word of caution, however, before relying too heavily on the software described above. Autodesk, a major architectural software developer, notably quotes the statistician George E.P. Box on their Building Performance Analysis page: “All models are wrong, but some are useful.” All models are just approximations of reality, but that doesn’t mean you can’t master energy modeling and get that approximation as close as possible to the real deal.

Below we will discuss a few popular energy modeling programs—it is important to note that none of these listed are “better” than others. The right software for you will depend on a host of things such as where your projects are located, what types of simulations you are planning on doing, experience with energy analysis, etc.

Created by the U.S. Department of Energy (DOE), EnergyPlus is a free console-based program that many architects, engineers, and researchers use to model both energy consumption and water use in buildings. Funded by the DOE’s Building Technologies Office (BTO), EnergyPlus is updated twice annually to fix bugs and give users the latest simulation upgrades. While comprehensive graphical interfaces are not included with the free EnergyPlus software, some that integrate seemingly well are available for purchase. DesignBuilder, which allows the widest range of options with regards to EnergyPlus integration, can be used to conduct energy analyses of BIMs loaded into the program, LEED energy prerequisite and credit assessments, BREEAM credit assessments, and much more.

The greater capabilities that EnergyPlus has over other energy modeling programs is acknowledged by many professionals, including Arpan Bakshi, an experienced building energy analyst and N.Y. Regional Chapter President of the International Building Performance Simulation Association. Arpan notes in his LinkedIn blog post comparing EnergyPlus to eQUEST, another DOE invention, that since eQUEST was built on an older energy simulation engine (DOE-2), and isn’t as relevant to high-performance design today, it is lacking in features compared to EnergyPlus. Alas, eQuest may still be a good option for beginners or projects that simply don’t require the latest and greatest high-performance system simulations.

The Quick Energy Simulation Tool (eQuest) works exactly as the name suggests. Developed by the DOE, this software was created as “a building energy simulation tool comprehensive enough to be useful to ALL design team members.” eQuest is supported as part of the Energy Design Resources program, which is funded by California utility companies.

One of the most commonly used energy modeling programs for LEED projects is Trace 700. Created by Trane, a brand of the air conditioning systems leader, Ingersoll Rand, this software has great integration with ASHRAE standards, LEED, and building information modeling (BIM)—users can easily import models from programs such as Autodesk’s Revit. In fact, all three of these integrations work very well together—users can import a model from Revit (or another BIM program), test it against ASHRAE Standard 90.1 (baseline for LEED projects), and then use Trace’s new LEED Guide and Baseline Building Creator to make adjustments to the model and make sure its on track for certification.

An AIA 2030 Commitment Progress Report, published three years ago, shows that Trace 700 closely trails eQuest as the second most preferred software for modeled projects. Within this report, it is noted, “Trace 700 does double duty analyzing energy simulation and sizing mechanical systems adding value to the process.” The AIA report also goes on to explain the importance of interoperability with most building information modeling software, which would “empower design teams to more easily incorporate energy modeling into the design process.” It seems that Trane also acknowledged this, as their most recent Trace 700 update includes Revit integration. Trace 700 certainly sits at the top of most experienced consultants’ lists, however, there may be a powerful contender out there that others prefer more. 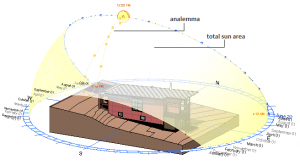 Don McLean created Integrated Environmental Solutions (IES) with the intent to provide energy analysis software that’s easier to learn and use. IES-VE-Ware was developed initially as a free module, which is compatible with Google’s free model building software, SketchUp. The folks over at IES have even created an IES-VE plugin for SketchUp, allowing architects and engineers to quickly assign building data information such as location, construction, and HVAC type right within SketchUp.

IES-VE Pro—which comes with a hefty price tag—is on the same playing field as Trace 700 and EnergyPlus. It provides many of the same features as the others with regards to advanced high-performance system simulations. However, it does seem to have better integration with the BIM software Revit. Like other energy modeling programs, such as Trace 700, users can import their 3D BIM model into IES’s software for performance and energy analyses. There’s also an option to install an IES plugin directly into Revit, which enables users to conduct IES simulations right inside the Revit program. As the AIA 2030 report, along with others in the industry make it clear, interoperability between BIM software and energy simulation tools will be the go-to for most design teams in the future, as it enables whole team collaboration across the design stage.

Verdical Group continues to provide energy modeling work for our high performance building projects in Los Angeles and all over Southern California. The software used by the engineers varies, and it is always interesting to see which programs are used for different buildings. The U.S. Department of Energy has recently published a draft “Building Energy Modeling Roadmap,” which, among other things, includes a visual representation of the capabilities between popular energy analysis tools. You can use this visual (posted below) to compare the energy modeling software discussed in this post, and get a better idea which program is most appropriate for your intended use. 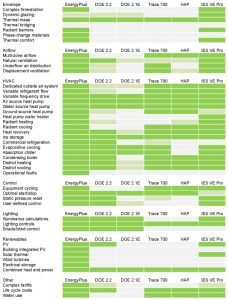