The Center for Sustainable Landscapes at Phipps Conservatory and Botanical Gardens

The Center for Sustainable Landscapes at Phipps Conservatory and Botanical Gardens

It seems the bar for green buildings is being set higher and higher with every new project coming onto the radar. However, the Center for Sustainable Landscapes (CSL) at the Phipps Conservatory and Botanical Gardens may have set the bar at its highest level. Completed in 2012, the CSL is increasingly being referred to as the most sustainable building in the world due to the fact it’s obtained the world’s four highest green certifications. The building has met the standards for LEED platinum, Four Stars Sustainable Sites Initiative, WELL building platinum, and most recently achieved Living Building Challenge certification, the toughest of them all. Glancing into how the CSL was developed, it is easy to see how this building is earning the title of most sustainable in the world.

During the development stages, the project took an integrative design approach, which means bringing together everyone who will be involved in the project at every stage from the beginning. The process is highly collaborative and strays away from the conventional, linear approach by looking at the whole entirety of the project first before any designing. Though this approach requires much more effort at the forefront, executive director of Phipps Richard Piacentini explains that this is the only way to design such a high performance green building. The CSL integrative design approach utilized nature as a model for how systems in this new built environment will interact with one another. From the beginning, Phipps had big goals for CSL to be net-zero energy, net-zero water, and have all its systems working together as one and there was no more efficient way to achieve this then integrative design. Through this development process, designers studied every aspect of the CSL project, challenging one another to go one step further to make this building something the world has never seen before.

At the heart of CSL’s design to maximize energy efficiency is an approach that Phipps labels as “outside-in, passive first,” which uses the building’s physical orientation along with an advanced building envelope to regulate CSL’s temperature. The placement of the building is designed to achieve as much daylight as possible, while also employing a variety of heating and cooling methods. Brise-soleil screens reduce summer cooling loads while light shelves and overhangs contribute to building heating during the winter. Also, the building’s temperature is regulated via a ground-sourced geothermal HVAC system, which captures 70% of its heating and cooling energy from the ground’s consistent 55 degree F temperature. Though it may seem like this building can’t possibly be net-zero due to its large size, think again. With a powerful PV solar system producing 133,000 kWh of energy per year combined with a vertical axis wind turbine, CSL offsets 100% of its energy consumption and then some.

Conserving and re-using water is no problem for Phipps CSL as the entirety of its irrigation, toilet flushing, and janitorial/equipment water use is supplied by captured rainwater. First and foremost, the CSL is complete with a green roof which reduces the volume of stormwater runoff as well as provides a natural water filter. Stormwater that does runoff from the roof and other nearby campus structures is captured in a 1500-gallon cistern and used for all landscape irrigation when necessary (as much of the vegetation is native to the area, this isn’t often). Any overflow is diverted into a 100,000-gallon lagoon, which also serves as an aesthetically pleasing landscape feature for visitors. Overflow from the lagoon is channeled into underground rain tanks which both have a 60,000-gallon capacity and have water withdrawn for non-potable uses. In addition to all of these features, the surrounding landscape is complete with five rain gardens and permeable paving throughout to allow for natural stormwater infiltration back into the ground. 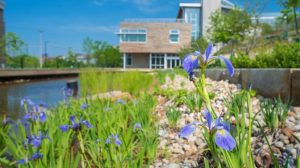 Looking to the future

The CSL at Phipps serves as an important part of the overall Phipps visitor experience, modeling the importance of the relationship between the built and natural environments. For Phipps, it was more then just building a building but making the connection between the human and the natural world. While the project has a long list of achievements, the overall goal of the CSL to inspire others to act towards a sustainable future is ongoing.

For more information on the Phipps Center for Sustainable Landscapes, check out this video and see the rest of the building’s impressive features.