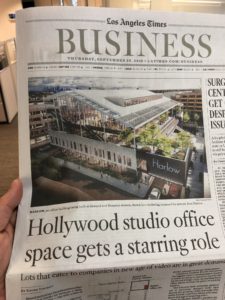 Verdical Group’s Sunset Las Palmas project, which is targeting LEED BD+C v3 Gold certification, is capturing the hearts and minds of Angelenos and Hollywoodites — before it’s even constructed! The project was featured in a recent print edition of the Los Angeles Times. The feature examined the upcoming studio and the history that Sunset Las Palmas carries with it as a film and television institution.