Perspectives on Net Zero – What Does the Future Look Like?

Perspectives on Net Zero – What Does the Future Look Like?

Verdical Group’s sold out Net Zero 2016 Conference, the largest net zero building design conference in the country, was hands-down the best yet. Not just because of the world-class lineup of speakers and exhibitors that captivated a packed SoCalGas Energy Resource Center in Downey, California. Not simply because all of the attendees seemed to leave the event with ambitious smiles on their faces, ready to venture out into the world to make their own mark on a net zero future. It wasn’t only due to awe-inspiring presentations such as “Net Positive Building Design for Higher Education” by Miller Hull architect Brian Court. No, the greatest aspect of the conference was the “Perspectives on Net Zero,” panel that convened gas, electric, and water utilities, municipalities, and a visionary nonprofit (the International Living Future Institute) to discern what a net zero future would look like.

How did each representative present their view on a net zero future? Below, the panelists’ various perspectives surrounding net zero energy and water will be reviewed. Based on their discussion, it’s possible to envision a future where net zero building performance is possible.

What does Net Zero mean, and how do we get there?

The panel moderator, Joel Cesare, began by discussing his own work in the net zero space. As Sustainable Building Advisor for the City of Santa Monica’s Office of Sustainability and the Environment, Joel pushes for green building policy measures such as the recently approved ordinance requiring rooftop solar systems for all new construction in the City of Santa Monica. Joel is also helping to put Santa Monica on the map as the first city to pursue construction of a Living Building Challenge certified municipal office building. Their new City Services building is expected to generate all of its power on-site through renewables and capture all water needed via rainwater catchment systems, and is currently scheduled to break ground in early 2017. If certified by the Living Building Challenge, this building would actually be considered “net positive,” as the current updated standard requires buildings to generate more energy than is actually needed to operate. Clearly, Santa Monica is doing its part to progress net zero design (and beyond) to significantly mitigate climate change impacts.

Marc Ulrich, Vice President of Customer Programs and Services at Southern California Edison (SCE), represents an electric utility tasked with, as Joel quipped, taking bold targets from the state and having to “go figure it out.” Marc was first on the utility lineup to respond to Joel’s two questions: “What do you see as the end game for net zero? How do we get there, and what does ‘there’ look like?” Marc responded by asking the all-important question right off the bat: “When you say ‘there,’ do you mean the next 10 years or the next 200 years?” Articulating the timeframe available to work toward a net zero future before irreversible climate change occurs shaped much of the dialogue to come.

When responding to the question “what does ‘there’ look like?” Marc said that “it’s going to be hard to see where the network is.” The grid won’t be what it is today. He went on to say that a net zero future, “Isn’t necessarily getting off the grid in the next 10 years,” but maybe in the more distant future there would be no grid at all. Marc also cleared the air about the electric utility’s perspective on homes and buildings generating their own power independently. He said that SCE, as a utility, is happy to play the role of distributor and connector rather than owning the infrastructure (solar panels). “We see ZNE being the catalyst and the accelerator for a lot of ZNE homes… and we’re very happy to play that role.”

In response to the same question, David Jacot, Director of Efficiency Solutions at another utility, the Los Angeles Department of Water and Power (LADWP), referenced the planned California building code change that will require all new residential buildings to be net zero energy by 2020. “The 2020 target will largely be met through energy efficiency,” said Jacot, going on to say that LADWP’s long term plan (10, 20, and 30 years out) “is getting smart grid infrastructure out there.” After going over the difficulties of transforming the market from an infrastructure standpoint and getting it deployed, Jacot said, “If you can get the customer to own the infrastructure, that is the goal…. If you’ve got the customer to own the PV [solar panels], and the battery storage, fantastic.” This echoed Marc Ulrich’s statement that electric utilities would be happy to provide grid connectivity through the meter to buildings that owned their own renewable energy generating equipment.

In Jacot’s response, however, one more interesting element was added to this equation: electric vehicles. Jacot said that electric vehicles were a big part of the future for LADWP. “Now you’re getting a fast floating consumption discharge resource out there. And it’s completely disaggregated. Between this and having the ZNE capability technologically across many or the majority of buildings also leads to a ZNE grid.” For those of us who don’t think of Teslas as “floating consumption discharge resources,” Jacot’s vision of electric vehicles taking on a role as contributors to the grid is pretty mind blowing stuff. 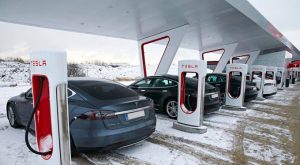 The final panelist representing an energy utility was Lisa Alexander, Vice President of Customer Solutions at SoCalGas. Right off the bat, Lisa remarked, “It might sound funny to hear this, but SoCalGas very much believes in zero net energy. We also believe it is the future of us as a gas utility.” Before moving on, it should be noted that there are various definitions of net zero energy out there, some of which don’t include gas in the equation. According to Alexander, the gas company’s net zero energy definition includes energy sources such as biogas, methane, natural gas, and hydrogen. She went on to state, “In a ZNE world, there are a number of different roles for gas. This is when we really start thinking across systems.” Referencing the energy and water system nexus, Lisa explained that, “Wastewater treatment plants can create fuel while treating the water, by using anaerobic digesters to turn the solid waste they remove into methane. And another role for natural gas in the ZNE future is something called power-to-gas.  This is a way to take excess energy generated by solar or wind and use it to break down water molecules into hydrogen and oxygen. This makes a carbon-free hydrogen gas which can then be converted to synthetic, renewable methane — traditional natural gas — and stored to meet future energy needs.” Lisa went on to discuss how various other gases can be created through smart integrative system strategies, such as adding algae to feedstock, which eventually leads to the creation of methane. Alexander explained that a net zero future could repurpose the existing natural gas grid for alternative energy distribution.

Responding to Joel’s question about a desired future for net zero energy, Lisa, perhaps taking note from sustainable development advocates that promote sustainability as one continual transition phase, said, “I don’t think there’s an end game, I think it’s a series of incremental changes and improvements that happen over time, and in the near term we’re driven by some very aggressive state goals.” Lisa went on to state that once they hit those goals, it’s not the end. She said that after the goals are met, they are going to be looking to their partners to make their community more sustainable.

Bill McDonnell, the only panelist to talk specifically about water, is the Water Use Efficiency Manager for the largest distributor of treated drinking water in the United States. The Metropolitan Water District of Southern California (MWD) delivers water to more than 19 million people in Los Angeles, Orange, Riverside, San Bernardino, San Diego, and Venture counties. McDonnell recognized that the water-energy nexus that Lisa Alexander discussed is a separate issue from “net zero water,” or the goal of harvesting all the water you need for your building on site. Southern California, unfortunately, will continue to struggle with its water constraints in the future—thereby making “let’s just capture rainwater for our buildings” a nearly impossible pathway to achieving net zero water performance in this bioregion. As one NOAA hydrologist puts it, the drought is “a very deep hole” that SoCal is in, and one that’s not going to be an easy task to get out of. This is why it makes the most sense for Bill and MWD to target reducing water-use in large existing buildings to cut demand, since it’s very difficult to increase production. He said, “We have to use potable water for potable things. We don’t need to use potable water to irrigate landscape, or put in a cooling tower, or for toilets.” Be on the lookout for more graywater systems and waterless urinals in the future. 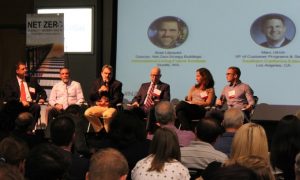 No, the final panelist was not forgotten. Brad Liljequist, Director of Net Zero Energy Buildings at the International Living Future Institute (ILFI), should be noted separately from the utility representative panelists above. Representing perhaps the most progressive, forward-thinking, nonprofit related to building design and product manufacturing, Brad presented a more urgent call to get to a net zero future before it’s too late. ILFI is pushing the building market toward a radically transformed built environment as quickly as possible. ILFI works by pairing initiatives such as ultra-green building certification systems (the Living Building Challenge) and the creation of market demand for super green high performance products, with visionary leadership. But, that doesn’t mean they’re at odds with utility companies who are working on more distant timelines to tackle climate change. This is why this panel was so unique. Brad summarized to the panel and audience a recent Bill McKibben article , “We’re at war, and we have to mobilize at that scale.” Going on to discuss the urgency of climate change, Brad said, “I’m going to say the end game is within two to three decades. It has to be. We don’t have a choice.” After Marc Ulrich from SCE heard Brad’s response, he said, “I agree with Brad, we don’t have 200 years. We need to move faster.” Aggressive environmental nonprofits and the largest utilities in the country are in agreement on the imperative to act quickly in the face of a changing climate caused by manmade emissions.

When discussing what the grid might look like in a ZNE future, Brad said that he thinks it will be an all-electric grid, “a connected grid for sure.” Dispelling the notion that ZNE is synonymous with off-grid, Brad stated, “I don’t think we’re talking about a bunch of autonomous buildings. I think things are interconnected and sharing.” ILFI’s vision of a net zero future includes the utility grid connecting buildings that create more energy than they consume. He went on to discuss how buildings are going to start showing massive reductions in energy use, referencing his latest book that has case studies of ZNE buildings showing an average reduction in energy use between 70-80% from current standards. Liljequist concluded, “At the end of the day, the combination of solar panels, locally produced energy (with little line loss), connected to high performance buildings…. I just think that pathway is going to win out.”

ILFI and the utilities represented serve a wide range of constituents, but are aligned in their efforts to mitigate the effects of climate change, and protect and prolong the use of our limited resources. Each organization has a different fabric, a different style, and different methods, but they were able to convene so powerfully because they have the same end-goal. As evidenced, it will take a variety of strategies, at the different scales at which these organizations operate, to bring us all forward into a brighter future.