Buildings account for nearly 40% of US carbon emissions. This means that low emission buildings must be part of our clean sustainable future. Initiatives such as Architecture 2030 and California’s Title 24 are not only helping to pave the way by creating a general framework for sustainable buildings but pushing the boundary with Net Zero Buildings (NZB’s) or Zero Energy Buildings (ZEB’s) that aim to almost completely offset a building’s adverse climate change impacts. These buildings will produce just as much energy as they consume and will be commonplace by 2020 and 2030.

Like with all good things there are caveats and with NZB’s, it is important to understand their role in the energy grid to prevent the pitfalls such as Germany’s utility death spiral—where we’ve learned that aggressive deployment of renewables without updating the grid can lead to adverse effects. Luckily, lessons and technology learned from the residential solar industry can be applied to NZB’s. A study from the New Buildings Institute envisions several potential futures for net zero buildings with a recent paper by ASHRAE directly addressing both potential and warnings. The bright side is that if NZB’s are properly incorporated into the grid, they have the potential to provide enormous benefits to society and help reduce carbon emissions beyond what the buildings can do in isolation. They have the potential to make our electric grid more resilient and more sustainable by participating in demand response, energy storage, and aid in the grid’s smart modernization. In the future, Net Zero Buildings will have the power to flatten peak load, provide energy storage services, and even provide clean energy to the grid.

A Closer Look at How NZB’s Interact with the Grid

It’s important to note that NZB’s still get roughly half their energy from fossil fuel. Only about half the power is generated (typically by solar) and consumed locally with the excess sent back to the grid. This is because the availability of solar does not match up with the temporal demands of a building; solar power is only available instantly and it can’t be stored. Excess solar is sent off and additional energy needed during times of insufficient solar is supplied by the grid. By balances these two flows can a building be “net zero”.

One problem currently faced is the lack of energy storage options. We currently can’t store that solar energy on a large scale. One thought experiment would be to imagine a scenario where a high percentage of buildings are net zero given today’s deployed technologies and policies. All the buildings would be able to supply about half their needs via their own local solar generation while the other half would have to come from fossil fuel. Now, how would these buildings attain their net zero status? The reason why the net zero model currently works is because during times of excess solar, that energy is sent into the grid to supply someone else’s need for power. Solar power is regionally consistent, meaning all the buildings in that area is receiving the same amount of solar at the same time. They are meeting all their needs and trying to sell back extra solar simultaneously with no one wanting to consume that excess.

The result? Although these buildings have reduced their dependence on fossil fuel by half, they are no longer net zero, additionally, they have created a difficult scenario for the utilities supplying the other half of their energy needs. 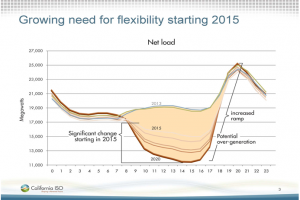 Daily consumption patterns don’t align with solar availability. Looking at the consumption curve above, demand for power goes down midday when solar resources are plentiful, however, demand spikes quickly later in the evening when everyone goes home and the sun is down. California ISO provides a forecast where the “duck curve” steepens as time goes on (Notice the duck?). The only way to supply this demand is to power up fossil fuel plants. Not only do we have to depend on fossil fuel, but the high ramping results in inefficient operation with customers paying for dirty power that are only utilized for a few hours during the day.

On the economic side, as more renewables go online and the demand for traditional power go down, so will the price of electricity. This means that the utilities lose revenue and have less money to maintain their fixed costs in transmission lines and generation facilities. In order to recoup their losses, they have to raise the price of electricity and incite customers to pursue their own renewables, further devaluing electricity and pushing the “death spiral”. Although some may praise the death of the utility, in reality it is harmful for buildings still dependent on the grid. Utilities will have less and less resources to spend on repairing power lines and maintain generation facilities, resulting in more severe brownouts and blackouts.

Technology and Innovation for a Successful NZB Future

Though that was a somewhat bleak vision of what the future may look like, there are solutions that are preparing us for the transition of high renewables and opportunities for NZB’s to play an important role for the grid and society.

Demand response: Building owners can shave peak load by either rescheduling certain operations or deploying battery power when receiving a signal from utilities. This helps to flatten out the duck curve, preventing the dirty fossil fuel powered “peaker plants” from going online. This is good for the utility because there less wasted assets to maintain.

Energy storage: Storage allows a building to store that excess solar power to be used at a later time. The buildings also become less reliant on fossil fuel sources enabling them to pursue true zero energy and even perhaps leaving the grid entirely. This also allows buildings to participate in the demand response and ancillary service market.

Microgrids: By connecting several buildings they can share their energy resources. By distributing energy generation and consumption over more nodes, you have greater reliability through redundancies and resource sharing. The system also allows for self-generation for localized areas which becomes critical during times of natural disasters when the main grid can go offline.

Ancillary service market: Buildings can also participate in the capacity market, frequency regulation market, and other support services to help create a more stable and reliable grid. The buildings even get paid for it.

NZB’s should be installing smart meters and energy storage alongside their solar PV’s to take part in these services. In the end NZB’s have enormous potential to help the grid and be the sustainable structures that they strive to be, so long as both the building designers and the utilities sufficiently prepare for widespread deployment.

The article The Flaw of “Zero Energy Buildings” Without Energy Storage provides additional insights and technical motivations behind the need for changes to the current zero energy model.

For more on NZB’s be sure to check out Verdical Group’s upcoming Net Zero 2016 Conference on August 19th in Downey, CA to hear from a panel of industry experts in Architecture, Engineering, and Construction. Come and engage in the conversation regarding the future of Net Zero and the grid.