How to Beat the Climate Crisis — Lessons From Don Shula, the Winningest Coach in NFL History

How to Beat the Climate Crisis — Lessons From Don Shula, the Winningest Coach in NFL History

Drew Shula is Founder and CEO of Verdical Group, a nationally leading sustainability and green building consulting firm based in Los Angeles. He is also the creator of the world’s largest net zero event, the Net Zero Conference. Verdical Group is a certified B Corporation and 1% for the Planet member company, working to reduce the impact of the built environment on the climate. Shula is one of just six individuals who have been honored as both a LEED Fellow and Living Future Hero.

Hungarian grit — that’s what I have running through my veins. A stubborn determination to succeed no matter the obstacles in your path. This is great ancestry for a risk-taking entrepreneur like me, especially one working to find solutions to one of the most menacing adversaries in human history — the climate crisis.

My great grandfather, Dan Sule, was born in Hungary in 1900 and immigrated to the United States at the age of six, settling just outside of Cleveland in Grand River, Ohio. The spelling of our last name changed to “Shula” when Dan’s first-grade teacher couldn’t properly pronounce the old world “Sule.” Dan worked as a fisherman on Lake Erie, and his son Don’s first job as a kid was helping his Dad on the fishing boats. Don is my dad’s uncle, my great-uncle, and would go on from cleaning fish in a first-generation Hungarian household to earning an American household name as the greatest football coach in NFL history.

Don Shula passed away one year ago on May 4, 2020 at the age of 90. He was our Shula family claim to fame, ubiquitous enough in the American psyche that when pulling out my ID at airport security checkpoints or at the local bar, I frequently get asked, “Shula… any relation to Don?” Avid football fans know the stats of Don’s truly remarkable Hall of Fame career, which included more wins than any other NFL coach ever (347), the only undefeated NFL season ever (1972 Miami Dolphins), two Super Bowl wins, six total Super Bowl appearances, and even a Time Magazine cover in 1972. 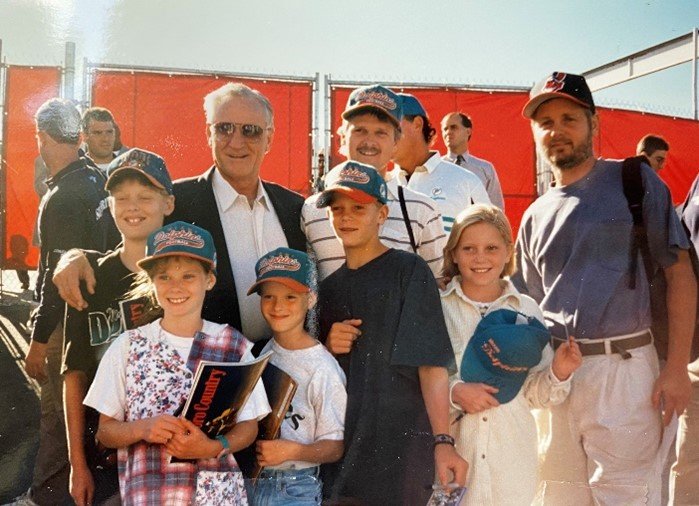 Don Shula with Shula family at the New England Patriots vs. Miami Dolphins game circa 1990. Don in sunglasses and me in a dark t-shirt at center, about age 10. My sister, dad, uncle, and cousins are also pictured here. Don invited us down to the field after the game, and I got to meet Dolphins quarterback Dan Marino.

But what does football have to do with the climate crisis? We’re in a do-or-die elimination game and we have no option but to win. It turns out that the greatest coach of all time has some inspiration for climate leaders working toward victory against the existential threat of climate change, and we need Don Shula’s hard-nosed winning instincts now more than ever.

Here are five quotes from Don Shula‘s illustrious coaching career that can energize us in our work to solve the climate crisis.

Leading by example is a foundational principle of work in the sustainability field. How can you lead on environmental issues if you’re not walking the walk yourself? I founded Verdical Group as a direct response to the fact that the building industry contributes 40 percent of global annual carbon emissions to the climate crisis. The industry needed help transforming the way we build in order to stop doing so much damage to the environment. I could see that the built environment needed to function more like the natural environment, with closed-loop systems. We needed to reinvent building design and construction if we were going to reverse the trend in atmospheric CO2.

While the company was initially just me in my garage, we quickly grew, found office space, built a team, and established a culture that reflected our values. While we make an impact through our day-to-day work by creating super green, net zero and zero carbon buildings, I also wanted to run our business operations as a force for good. We incorporated as a Benefit Corporation with the State of California, a for-profit corporate entity that aligns our mission and values with growth over the long term. This structure legally requires considering our environmental and social impact along with our financial performance, whereas most companies only consider shareholder value. Verdical Group is also certified as a B Corporation by the third-party B Lab organization. We consider the impact of our business decisions on our team members, clients, suppliers, community, and the environment. We also give back through the 1% for the Planet program, donating 1% of our total annual revenue (not just profit) to environmental nonprofit organizations.

Environmental leadership is based on the passionate belief that our natural environment needs to be protected from pollution and degradation. Coincidentally, at nearly the same time Don Shula was retiring with 347 total wins in 1995, carbon in our atmosphere was measured at about 347 parts per million (ppm). Over the ensuing 26 years, atmospheric carbon has continued to increase and recently hit a new record of 420 ppm. While my face hasn’t been on the cover of Time Magazine like Uncle Don’s, the problem I’ve dedicated my career to solving—climate change—has been the Time cover story multiple times, and icons in the sustainability space like Elon Musk, Al Gore, and Bill Gates have been repeatedly featured.

It’s an incredibly exciting time to be working in the climate crisis response space, with new commitments being made and goals being achieved across the globe every day. Nationally, the U.S. has rejoined the Paris Agreement and is pushing for climate action and science-based targets. And here at Verdical Group, our team of engineers, architects, and environmentalists are focused on reducing the building industry’s impact on the climate crisis. 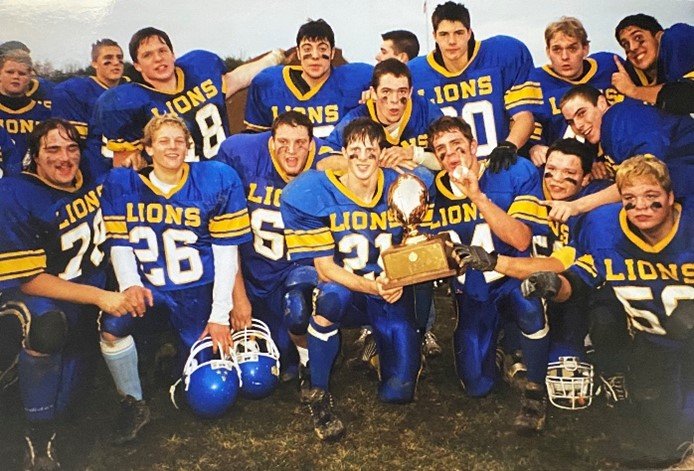 The 1999 Belfast Lions football team posed on the field with their trophy after winning the Maine High School State Championship. I’m in the front row, second from left, and was the starting kicker.

3. “The one thing that I know is that you win with good people.”

As a CEO, one of my most important jobs is choosing people to join our team. People have created the climate crisis and people will get us out of it.

When I was about 15 years old, we made the trip to Canton, Ohio to attend Don’s Hall of Fame induction ceremony. Don was honored for his career coaching achievements, but his team’s performance under his leadership was critical to his own personal achievements. You don’t get to the Hall of Fame without great people around you. Great leaders’ job is to find the best people, and inspire them to do their best work.

4. “Work isn’t work unless you would rather be doing something else.”

Love what you do. Family is super important to balancing work and finding long-term fulfillment, but I enjoy my work as CEO of Verdical Group making a positive impact on the world—so much so, that it’s usually hard for me to stop working at the end of the day.

Because Don’s passion for his work led him to achieve great success, he was able to break into a larger cultural moment. His presence spread beyond NFL stadiums to pop culture: He and his Miami Dolphins were featured in classic Jim Carrey comedy Ace Ventura Pet Detective; Don appeared in HBO show Ballers starring Dwayne Johnson and John David Washington; and Miami rapper Pitbull even name-dropped Don in his 2010 radio hit Shut it Down.

It goes to show that when you have success within your industry, your impact is magnified across other parts of culture. We’re working in a macro context where Biden’s White House is targeting a U.S. carbon emissions reduction of 50% by 2030. There is a critical amount of

impactful work to do over the next decade to avoid an increase in temperature of more than 1.5 degrees Fahrenheit and the catastrophic climate change impacts that would inevitably ensue. But that doesn’t mean we can’t advance the cause through pop culture. After all, Pitbull did also release an album titled Climate Change.

5. “There’s nothing wrong with setting goals, but it doesn’t mean a thing if you don’t pay attention to the day-to-day details.”

It seems like every Fortune 500 company is setting a 2030 or 2050 carbon neutrality goal these days, but goals are nothing if the incremental steps to get there aren’t taken. The sustainability industry has been plagued by “greenwashing” companies that make false claims and empty promises.

I created the Net Zero Conference to showcase real case studies of buildings that illustrate how we can get net zero accomplished today. Setting future goals and benchmarking our current performance are important first steps, but we must back that up with action. Life is short. Seize the day and make an impact at your company now.

In my lifetime, buildings will transition from being carbon emitters to having net zero impact. And one day, those same buildings will become regenerative —producing more energy than they consume. The faster we can make this transition, the better. Our goal at Verdical Group is to still be playing football on Earth a century from now. Let’s avoid being forced to become an interplanetary species with a new league on Mars. 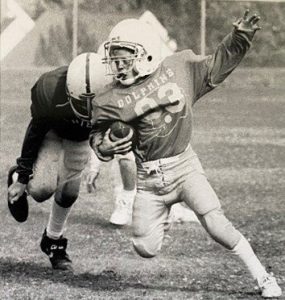 Playing pee wee football in Maine growing up, about age nine here. Of course I played on the Dolphins, the same team Uncle Don coached in Miami.