How Building Energy Modeling is Used

How Building Energy Modeling is Used

When reviewing a high-performance building, it is instantly apparent how much time, effort, and resources went into making the project so efficient. Knowing that nearly every aspect of building operation requires extensive amounts of energy, do you ever find yourself wondering how architects design such efficient buildings? A tool known as Whole-Building Energy Modeling (BEM) is where it all begins.

The Basics of BEM

BEM is a versatile, multi-purpose tool that uses physics-based calculations of building energy consumption to analyze and improve building energy efficiency. The software analyzes aspects such as construction materials, HVAC, and water heating with descriptions of its use and operation, such as schedules for occupancy and plug-loads. BEM also adds in information about local weather patterns and then uses physics equations to calculate building thermal loads, system response to these loads, and the resulting energy use for the building. As if this weren’t impressive enough, BEM programs can perform all this analysis in under an hour.

Energy modeling is extremely important when designing sustainable buildings, as it can be used to quantify tradeoffs between up-front construction costs and operational energy costs, preventing expensive infrastructural adjustments further into the project. Mechanical engineers also use BEM to design effective HVAC systems and test control strategies for these systems. On a larger scale, energy modeling analysis on prototype models supports the development of energy codes and standards, helping utilities and governments plan large-scale energy efficiency programs. Looking closer at energy modeling’s price tag, costs are typically higher up front. However, a study completed by Anica Landreneau at HOK found the average energy modeling payback period is a short 1-2 months.

The U.S Department of Energy (DOE) is certainly not absent from the BEM community. DOE has supported research, development, and deployment of BEM, and has been an active user since the 1970s. DOE continuously develops two significant BEM software packages through their Building Technologies Office (BTO). The first of these, titled EnergyPlus, is a BEM engine capable of modeling low-energy buildings and HVAC systems, in addition to more conventional designs. The second, OpenStudio, is a software development kit that reduces the complexity of EnergyPlus-based application development. There are various other energy modeling software options available – each designed to fit specific projects’ needs.

Located only a couple miles from VG’s downtown Los Angeles office is the Wilshire Grand. Aiming for completion in 2017, the Wilshire Grand will be the tallest building west of the Mississippi, standing at 1,099 feet. As a mixed-use project, it will feature retail, commercial office space, restaurant space, and a 900-room hotel. The building’s initial design included an all-glass façade that would be iconic to LA’s downtown skyline. To complete a project of this scale, a two-fold envelope study was completed to, first, find the optimal window-to-wall ratio, and second, to tune the envelope parameters to improve building energy efficiency. 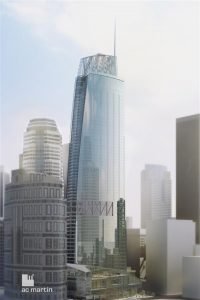 Multiple energy models and studies were developed to quantify the effect every design decision would have on Wilshire Grand’s envelope. The first analyzed the shading effects of surrounding buildings on the Wilshire Grand’s façade. The team used a conceptual massing model to analyze the shading on the building at various times of the year. These results would inform the team how portions of the façade that receive more direct solar insolation can be designed with increased shading devices to reduce overall energy costs. They were also able to employ clear, less-glazed windows on portions of the façade that receive far less sunlight. After determining the impact on the building from shading, a simplified energy model was created to then find the ideal window-to-wall ratio (WWR). The original design included a visible glazing percentage of roughly 80% of the building’s façade. After the initial analysis, the team found that the most efficient ratio would be in the 50-60% range, which they then assessed further using the energy model. The results revealed that 50% would be the ideal ratio with regards to balancing the additional cost with optimal building efficiency.

The energy models used to visualize shading, WWR, and glazing led to an optimized façade design with significant energy savings. The conclusion of the envelope study culminated in a report that ultimately allowed Wilshire Grand to save $893,428 annually on energy costs, a 24.2% overall energy cost savings.

Another real-world example of energy modeling can be found in the completion of Zurich Insurances’ North American headquarters located in Chicago. This 780,000-square foot building was completed in 2016 and has achieved LEED Platinum certification. Seen above, the building is composed of three primary “bars” that are stacked and arranged to optimize their solar orientation. Using energy modeling software, the head engineering firm, Thorton Tomasetti, provided detailed daylight studies to evaluate the effects of automated interior blinds and fine-tune the depth of exterior shading devices for each specific orientation. This analysis optimized the depth of the shades for energy performance, which reduced peak solar gain for better thermal comfort.

Similar to the Wilshire Grand, the project team also optimized the façade for reduced energy consumption. To achieve this, the engineering team modeled the ventilated, double-wall façade on the lower south-facing side using computational fluid dynamics (CFD). The wall is now designed to reduce solar gains in the summer, increase gains in the winter, and improve daylighting, resulting in a 33% estimated energy savings.

Both building examples demonstrate the importance of energy modeling and how the process leads to significant increases in building energy savings. The list of uses for energy modeling continues to grow as software technology steadily improves, allowing for larger adoption.