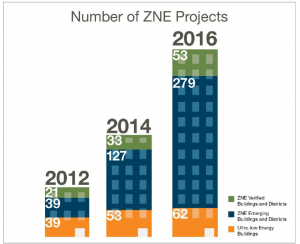 We are now seeing some of the world’s biggest companies like LinkedIn, Apple, and Adobe employ net zero design into many of their new offices. With the influence of well-known companies and the increased capabilities of project design teams, the future of zero net energy is extremely promising. However, buildings that have yet to make an impact in the world of net zero are those of restaurants, convenience, and grocery stores.

It’s obvious that commercial office buildings use large amounts of energy due to their massive size. What isn’t as obvious is that grocery stores are among the most energy intensive commercial buildings, consuming two to three times as much energy per unit floor area as office buildings. The single biggest contributor to their energy footprint is refrigeration. To keep food fresh, massive display and walk-in cases operate continuously to maintain a significant temperature differential between the case and surrounding store space. Heat that is extracted from these cases is heat that has transferred from this surrounding store space, providing a cooling effect to that space. For stores with many open cases, this cooling effect is often larger than the total internal and envelope heat gains to the space, requiring additional heating for the store even with higher outside temperatures. A step in the zero net energy direction for grocery stores is recovering the heat rejected from these refrigeration systems to use as a source for space heating or pre-service water heating. While the design of a system like this depends on climate factors, type of refrigerant system, and type of HVAC system, it has a tremendous effect on the energy footprint of grocery stores.

To reach a truly net zero future, an increased focus needs to be put towards not just grocery stores but also restaurants, as both of these buildings use significant amounts of energy for their size. 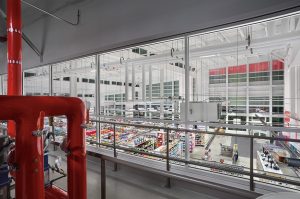 The biggest hurdle for this store was implementing a refrigeration system that used natural refrigerants, while also capturing the heat that is normally discharged for other uses within the store. The store relies on a carbon dioxide refrigeration system that recovers lost heat from freezers and coolers and rejects it back into the building for heating, domestic hot water, or into the geothermal exchange system. While grocery stores will need to achieve this at a larger scale, this project shows that having zero net energy supermarkets can be a reality.

A Whole Foods Market in San Francisco is on its way to becoming a verified zero net energy grocery store. Prospect Silicon Valley is leading this project as part of its MarketZero campaign. This initiative focuses on transforming grocery stores into net zero buildings to aid the California Energy Commission in achieving its goal for 50% of existing commercial building stock to be zero net energy by 2030. MarketZero project partners include Whole Foods, SF Environment, Arup, and the Lawrence Berkeley National Library.

The Whole Foods Market in S.F. received major updates to hit the zero net energy target – including improved refrigeration techniques, upgrades to kitchen equipment like fans and vents, and increased insulation. Additionally, phase change materials for efficiency and load shifting for the freezers and refrigerators may be considered. Once completed, this project will serve as a major case study for other stores throughout California.

In 2015, fast-food chain McDonalds released a study that looks at the technical and financial feasibility of achieving zero net energy for one of their restaurants. This represents a real breakthrough for net zero as McDonalds is one of the most well-known fast food companies and has huge influence over the industry. Conducted by Rocky Mountain Institute, Fisher Nickel Inc, and NBI, this study analyzed many locations for this possible eatery including Chicago, Orlando, and Washington, D.C. In all three locations, the study found that zero net energy is possible without any reductions to the menu or service.

The study first revealed that a large portion of the facilities’ renewable energy production would come from a solar PV system installed on the building or over the parking area. Looking at improving energy efficiency, the team identified kitchen equipment upgrades which made it possible to cut current energy usage in half. Using a whole-systems approach, the team analyzed the way buildings systems interact and found that HVAC energy consumption is very closely tied to kitchen equipment energy consumption. To maintain both thermal comfort and cooking processes, the implementation of targeted ventilation strategies paired with solar thermal, geothermal and waste heat loops could save 90-95% of HVAC system energy use. While designing and building this facility will take time, McDonalds intends to prioritize these findings to build this first-of-a-kind facility.

At the pace at which verified zero net energy buildings are growing, we may see the first ever net zero city sooner than we thought (hint: see Lancaster, CA). However, there is currently much to be explored within the world of net zero buildings, and the perfect place to do it is at VG’s Net Zero Conference 2017. It is the nation’s largest event dedicated to net zero building design and includes a full program of net zero case study presentations from nationally leading firms, an exhibitor table expo, and high quality networking opportunities. Located at the Net Zero Plus Facility in Commerce, CA, the conference will be held on August 24th this year. Click the link above to find more information and register – we look forward to seeing you there!