The Sci-Fi Vision to Push Us Further

Sometimes, science fiction gets it right. Total Recall, one of Arnold’s first slam dunk movies, predicted full body scanners before they were the norm at airports (you may know them as x-ray “backscatter” machines). Blade Runner, released in 1982, introduced video calls to moviegoers. Now we have Facetime, Google Hangouts, Skype, and who could forget Snapchat, where we can even communicate with one another while wearing weird virtual masks. It’s great to see how old movies have unintentionally informed modern technology. But, watching modern Sci-Fi movies and wondering whether or not they will accurately depict the future of humanity can be a little worrisome for some. One recent flick, Midnight Special, has an ending (spoiler alert) that should not trouble anyone, but instead be an inspiration for how our built environment should look in the future.

Midnight Special, in one sentence, is a movie about a kid with superpowers who ends up being some type of multi-dimensional alien who goes “home” to his alien world that is built on top of our reality. The plot is not the point here. The ending scene, which shows the alien buildings, made of organic materials and running off wind and solar, is what we’re after here, both metaphorically and literally. In the final ten minutes or so of the movie, massive alien structures appear out of thin air, all of them shaped in unique forms and twisting slowly with the wind. Some of them have biophilic design built into their walkways, connecting one building to the next with tree-filled paths. Other structures resemble wind turbines fit for a Guggenheim museum. Jeff Nichols, the film’s director, explained in an interview that he purposely made these buildings have a “light footprint” because the aliens are advanced, and therefore should have “some idea of solar energy, wind energy.” This is the Sci-Fi vision that we all hope turns into reality. And it just might. 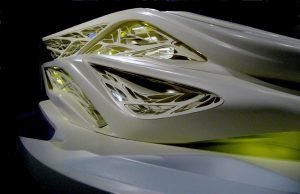 The Abu Dhabi Performing Arts Centre, a concept that is strikingly similar to the structures seen in Midnight Special.

The Home of Hollywood is Closing in

Starting on January 1st, 2017, the California Energy Commission’s (CEC) new building energy efficiency standards, known as “Title 24,” will go into full effect. These mandatory requirements for all new buildings and renovations will reduce energy used for lighting, heating, cooling and more—producing energy savings that the CEC estimates will also reduce about 160,000 metric tons of carbon emissions per year. This is a great start to what California has planned next.

In 2020, all new residential buildings in California will be zero net energy. Well, that is the current goal at least. Getting there will be a difficult task, but certainly not impossible. A zero net energy (ZNE) building must provide on-site renewable energy sources equal to the amount of energy used by the building. If California achieves its goal, all residential buildings being built after 2020 will start to look more and more like those renewably-powered “Sci-Fi” structures in Midnight Special.

In order to achieve the ZNE target, a building must be designed with super-insulation, daylighting, natural ventilation, and many other energy-efficient passive strategies. Only after a design team gets a building down to its utmost efficiency should it be fitted with solar, wind, or even geothermal on-site energy sources to take care of its remaining cooling, heating, lighting, and movie-watching needs. Usually, the larger the building, the greater the difficulty in achieving ZNE. This is why California pushed back the ZNE goal for commercial buildings to 2030.

Commercial buildings in California will have to consider energy efficiency measures for numerous elements in order to meet the new ZNE standard—elevator lights and fans have to shut off when not in use, windows must have sensors on them that turn off the heating and cooling systems when they’re opened, managers must be able to control energy management systems with digital controls, and much more. As new efficiency technologies and designs become cheaper, and the market adapts to the shift, hitting the commercial building ZNE goal will certainly be achievable. President Barack Obama just mandated last year, through Executive Order 13514, that 100% of all new Federal buildings be ZNE by 2030. The Department of Energy’s National Renewable Energy Laboratory led the way with their Research Support Facility (RSF) in Colorado, which is one of the largest net zero energy buildings in the world.

How We Will Get There

If you’re interested in learning more about how we will turn the inspiring Midnight Special vision into our reality, attend the 3rd Annual Net Zero 2016 Conference Verdical Group is hosting on August 19th in Downey, CA. The Conference will feature six short Ted Talk style presentations from Architecture, Engineering, and Construction (AEC) industry leaders and will address how we can achieve California’s bold net zero goals.