California: Pushed to the Forefront in Sustainability

California: Pushed to the Forefront in Sustainability

Why is California so sustainable? Well, necessity really.

Why is California so Low Carbon?

Sure, California’s temperate climate helps reduce the need for artificial cooling and heating needs, but the state has been aggressively pushing renewable energy and smart growth for years. For California, sustainable development is more than just about combating climate change and saving polar bears—there’s an immediate economic and quality of life case for it as well.

In the past, California planning tried to accommodate its ceaseless growth through traditional planning practices, but this only resulted in sprawling cities. Traditional planning meant building more single family houses spread far from the central city. It has led to the expansions of streets, highways, powerlines, and the dependence of private automobile. Building and maintaining such geographically spread infrastructure networks was also very costly. (Go figure. America’s infrastructure is so bad and underfunded that we have earned D’s on our Infrastructure Report Card).

This growth pattern resulted in traffic congestion, longer commutes, increasing demands for infrastructure, and higher carbon emissions. California understood the impacts of traditional practices of city planning, infrastructure development, and energy generation. The state knew that places such as the Bay Area and Los Angeles could not be sustained with sprawl and fossil fuel.

The need for smart growth also comes from California’s relationship with the environment itself. The majority of the state’s population lies along earthquake-prone fault lines. Additionally, Los Angeles imports nearly all of its water from distant sources; the city is considered an arid environment with very little local water production. Energy and water efficiency and the use of renewables greatly benefits the resiliency of state, allowing it to better endure natural forces such as earthquakes and droughts. Earthquakes have the potential to sever water and power, but we can mitigate the damage by having local power production and reducing demands for water. California has also become the country’s leading agricultural producer. It is a multibillion dollar industry that consumes the bulk of the state’s potable water. Given the current drought, water efficiency measures are critical for the state’s economic livelihood.

California has implemented a number of different policies to push for sustainable growth. The California Global Warming Solutions Act of 2006 solidified the state’s stance on climate change and directs aggressive carbon reductions for the state. From it came The Sustainable Communities and Climate Protection Act of 2008 that addresses emissions from the planning and transportation sector. It’s the first of its kind to have climate change incorporated into urban and transportation planning. From it comes policies rooted in Smart growth and New Urbanism. It pushes for denser, transit oriented development and promotes infill development that brings people close to the urban core and reduces the need for long car-dependent commutes.

Additionally, California has aggressive fuel standards for vehicles. These paved the way for it and the rest of the nation that followed suit with CARB’s tailpipe CAFÉ standards. California wants to reduce emissions from private automobiles with electric vehicles and increased use of public transportation.

The state also has a green building code known as CalGreen that mandates energy efficiency targets for homes and commercial buildings. It also plans for all new residential homes to be net zero energy by 2020 and non-residential by 2030. Its Renewable Portfolio Standard calls for 33% renewables by 2020, and despite having more LEED buildings than any other state, it calls for all new or renovated future construction to be LEED Silver. The state is also aggressively pushing for water efficiency standards across the board.  Along with state policy, many cities have followed suit and adopted their own plans for sustainable development such as Plan Bay Area and pLAn Los Angeles. 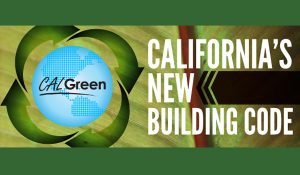 The reality is that sustainable development is not only necessary to combat the long term effects of climate change, but it is required to help facilitate the growth that the state is experiencing. With a growing population you need more energy, water, more homes, and more infrastructure. Growth could happen in the traditional sense: single-family sprawl, fossil fuel plants, expensive infrastructure, and congestion. Development could waste water and energy and make its residents more vulnerable to natural disasters.

The alternative is sustainable development and that’s why California has been so aggressively pursuing it. California is pushing policy and investing money into solutions that are not only green, but also economical and resilient. New building codes and standards are driving Net Zero Buildings, LEED construction, renewables, and infill development. People are starting to enjoy shorter commutes, cleaner air, energy savings, and more confidence in their energy supply. Renewable energy penetration is preventing the construction of new fossil fuel generation and transmission facilities, and water efficiency measures are mitigating the impacts of the drought and preserving California’s agriculture.

The triple bottom line of sustainability: Society, the Environment, and Economics have all come together for California.