A Discussion With Perkins+Will On Mass Timber

A Discussion With Perkins+Will On Mass Timber

Concrete is the second most consumed substance on Earth after water. Now, that statement may not come as a surprise to you if you work in design, construction, or real estate. After the Industrial Revolution, the majority of the Western world’s buildings have been erected with concrete and steel. And, as urban populations grow over the next 30 years (L.A. is projected to gain an additional 1.5 million people by the year 2050), the use of concrete is expected to increase rapidly to meet the demands of urbanization. But at what cost to our environment?

Cement, the primary ingredient in concrete, accounts for around 5% of global carbon dioxide emissions, which are associated with climate change. As we build out our cities, making room for future populations, that percentage will only continue to grow. Cement production increases 2.5% annually, and is expected to rise from 2.55 billion tons in 2006 to 3.7-4.4 billion tons by 2050. In order to moderate the enormous greenhouse gas emissions associated with these urbanization projections , more efficient, economical and sustainable building construction materials must be developed.

Is there a superior alternative?

Wood is back on the menu. Recent innovations in wood manufacturing and engineering have led to the creation of “mass timber” products. One such product is cross-laminated timber (CLT), a large, panelized wood structure comprised of several layers of wood planks glued together. Many architects, developers, and environmentalists are claiming this is the building material of the future. There are of course a number of reasons why the green building industry loves CLT—as Rebecca Holt of Perkins+Will notes, “wood is the only building material that is made by the sun, completely renewable, and able to absorb and sequester carbon throughout its lifetime.” But, what are its other benefits? Why would a profit-driven developer choose to build with mass timber products rather than cheap, reliable concrete?

Fortunately, I was recently given the opportunity to sit down with an expert on the topic and find answers to these sorts of questions. A mass timber guru happened to cross paths with me at the Verdical Group office, where we are co-located with Pankow Builders in Pasadena, California. Andrew Tsay Jacobs, Director of the Building Technology Lab at Perkins+Will, was giving a presentation on mass timber to the Pankow team that day.

Andy is a member of the International Code Council’s Ad Hoc Committee on Tall Wood Buildings. The ICC board has tasked the committee with looking at potential code revisions that could allow tall wood buildings (the handful of mass timber projects already in development in the U.S. had to satisfy local building code officials with performance-based workarounds to prove safety compliance). Andy has also presented on high-rise mass timber design at the Structural Engineers Association of California Conference and recently at the International Conference on Structures and Architecture in Portugal.

Why do you believe the mass timber movement has gained so much momentum recently? Would you say the main driver behind using mass timber is its carbon-sequestering abilities, which contribute to a project’s sustainability goals? 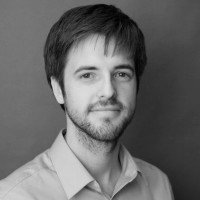 Andy: Achieving carbon sequestration in a renewable material is certainly a major factor contributing to the momentum being gained by mass timber products.  Projects using  mass timber structures can greatly help to achieve net zero carbon emissions goals..  However, there are many other benefits of mass timber that have contributed to its rise.

In the early 2000s, European projects demonstrated the cost competitiveness and schedule advantages of using mass timber in construction.  While the cost of construction can be roughly equivalent to traditional construction methods in steel and concrete, the schedule savings can be very significant.  Up to 25% project schedule savings can be achieved because of the speed of erection (2 floors per week on residential tower projects), which can yield significant financial benefits for building owners.

The high strength to weight ratio of mass timber makes it suitable in earthquake prone regions because the reduced mass of the structure reduces the seismic forces on the building, resulting in less-intensive foundations.  In addition, market demand for thin floor plates has been answered by nail laminated timber and cross laminated timber floors which provide assemblies much thinner than those achievable with wood joists or 2x members.

With the oversight of the USDA, good legislation has been enacted in the past few decades to preserve and sustain the forest lands of the United States.   Forest products on public lands are harvested in a sustainable way and trees are replanted to ensure regrowth of the forests.  However, also due to legislation, some forests have been over-protected and it is now recognized that many forests are in need of thinning to protect them from uncontrollable fire. To grow the domestic market for timber products, the USDA launched a competition in 2014 offering $3 million in prize money for projects that would take on high-rise construction using mass timber.

In summary, market forces, schedule savings, performance characteristics and even government support have all contributed to the growing interest in mass timber structures.

It seems that there are many misconceptions and myths surrounding the use of wood as a building material, especially for commercial buildings. How is Perkins+Will helping to educate the construction industry and developers on this new alternative to concrete and steel?

Andy: Perkins+Will has engaged in fundamental research as well as surveys of mass timber projects worldwide.  Our fundamental research focuses on theoretical designs of high rise wood buildings up to 80 stories.  In addition, Perkins+Will is participating in the International Code Council’s Ad Hoc Committee on Tall Wood Buildings.  This committee is looking into the possibility of code changes allowing taller mass timber construction.  Finally, Perkins+Will has designed multiple projects using mass timber.  Some of the largest are the Earth Sciences Building and the Center for Interactive Research on Sustainability at the University of British Columbia. 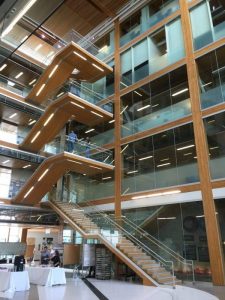 Earth Sciences Building at the University of British Columbia, Vancouver, BC

How are the main components that make up a mass timber structure—cross-laminated, nail-laminated, and glue-laminated (glulam) timber—manufactured? Was there a recent development from the wood manufacturing industry that suddenly made it possible to create these engineered wood products?

Andy: In the case of glued laminated timber and cross laminated timber (CLT), the raw ingredients are wood and adhesive.  Solid wood elements (lamella) are stacked in layers with adhesive between the layers.  The assembly is then pneumatically pressed and subjected to heat or high-frequency waves to speed up the curing of the adhesive.  Finally, the cured assembly is cut and milled to job specifications and shipped to the jobsite.

NLT technology has been around since nails were invented.  Its use has been permitted by the building code in the United States for many decades, and there are many examples of its use from the late 19th century, particularly in grain silos.  As an unsophisticated and visually rough assembly, its primary applications were historically industrial in nature.  However, it is experiencing a rebirth as the ease of fabrication, low cost, and industrial aesthetic are attracting market attention.

The development of glued laminated timber comparable to today’s products began in Europe at the turn of the 20th century.  It gained market traction in the United States beginning in the 1930s.  CLT was developed in Europe in the 1970s as a logical extension of concepts from glulam and plywood.  By orienting the lamella layers at 90 degrees to each other in successive layers, the resulting CLT panels have bi-directional strength, like plywood only much thicker and stronger.  Panels as large as 65 feet long by 19 feet wide by 1 foot thick can be fabricated.  These large panels can be used as floors and walls in buildings, replacing concrete and steel in many cases. CLT began to gain significant traction in the United States in the 2010s as the wood industry mobilized to develop product standards and revamp building codes to ensure CLT would have a successful domestic future.

It seems that the building industry’s increased adoption of sustainable design has triggered new, innovative approaches for utilizing natural materials in technologically advanced ways. What other bio-based materials is the Building Technology Lab at Perkins+Will looking into? 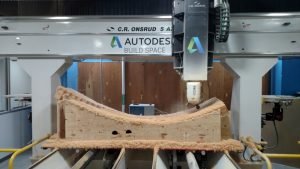 Mass timber isn’t simply a green building fad, it’s a resurgence of one of the oldest building materials used by man. The desire to use wood in commercial buildings will increase not only because it’s the more sustainable choice, but because building occupants and tenants will prefer it. A twelve story mixed-use building in Portland and a ten story residential building in New York City—the two winners from the 2014 USDA competition that Andy mentioned, who split the $3 million grant prize money—will break ground in early 2017. Aside from these experiments proving that tall wood buildings can easily satisfy code compliance, their occupants may discover something that many of us have long forgotten: wood structures are more enjoyable to live in.